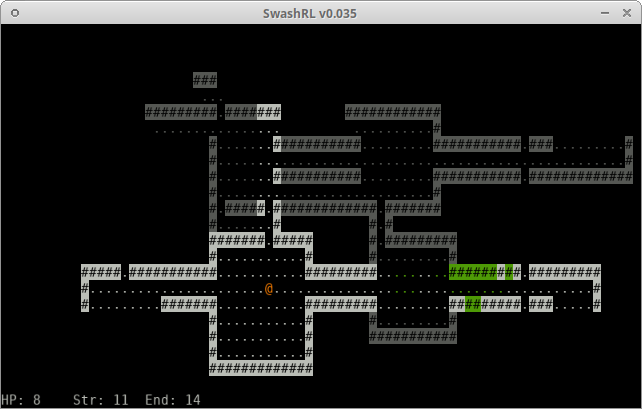 SwashRL is a Roguelike game currently in the early development phases. The actual "game" part is not yet functional, as it's still in need of a few important pieces.

As the software is still under development and has not seen an official release, it currently has NO DOCUMENTATION, save for that mentioned in this file.

SwashRL currently has git respositories hosted at the following locations:

If you're reading this Markdown file in a text editor or other program that doesn't display hyperlinks, links to files or web pages referenced in this document can be found at the bottom.

SwashRL is released under the BSD 3-clause "New" or "Revised" License, a simple open-source license which allows for free use in exchange for retaining the original license with all source distributions and not misrepresenting the authors as endorsing the software.

SwashRL uses some third-party resources to function. For details, see the acknowledgement file and the third-party licenses referenced therein.

If you'd like to become a volunteer maintainer for SwashRL on your system, contact me and I might be able to add you to the GitHub repository as a collaborator.

Starting with version 0.022, SwashRL has been programmed in D. This means you'll need DmD or some other D compiler, but if you also get dub, the D package manager, it will do a lot of your work for you including downloading dependencies.

You can make some changes to how SwashRL is configured by editing the file config.d. This file has a lot of comment blocks which explain how to configure SwashRL. These configuration settings will be interpreted in global.d.

To compile, navigate to the root folder (the same folder this readme file is in) and type:

You'll need to be connected to the Internet the first time you compile so that dub can download the packages that it needs.

By default, SwashRL will compile with SDL. However, you can also compile with ncurses by using dub's --config flag, and even compile with only ncurses, by using one of the following commands:

You can also compile with PDCurses, which is compatible with Windows, using one of the following commands:

If you're not sure whether or not your source code is in a git repository, check and see if there's a .git directory in this folder. If there isn't, you can get the up-to-date source repository from our GitHub page.

For more information about git, check out the git website.

There are a few things to note if you want to use the SwashRL source code to make your own game. First of all, the BSD 3-clause License is very permissive, and unlike the GNU GPL and other copyleft licenses you absolutely can commercially exploit SwashRL without having to release your source code. This is not an oversight; I have intentionally licensed SwashRL to allow you to do this. However, you must retain all copyright notices, attribution notices, etcetera.

Secondly, you'll have to change the name of the program. I've made this very easy to do. It only requires two steps:

Third and finally, be aware that SwashRL is not the only licensed product you will be interacting with, and there are a few other licenses that you'll have to comply with, as noted in the acknowledgement file.

For all of your change logging needs, see changes.txt. For those interested, there's also a more in-depth history of the project being recorded on the website.

If you're thinking of making a contribution to the SwashRL project, first of all thank you very much! We now have contribution guidelines to help you get started.

The best way to contribute to SwashRL is via our GitHub page, where you can follow the conversation and see where we need help.

If you like the SwashRL project and would like to support me, you are encouraged but not required to help me in a personal quest of mine by making a donation to a nonprofit organization. ForeGen is a medical resarch project that is helping to study and put into practice regenerative medicine beginning with the regeneration of amputated foreskins. This approach to regenerative medicine is not only a simple way to begin putting this research into practice; it will also help men who had their genitals cut against their will as children regain their genital integrity and help them cope with their lost bodily autonomy by putting them back in control over their own bodies. With time this research can do a lot of good in the immediate sense, but can also be expanded into bigger and better uses of this blossoming technology.

If you need further information on why this is important, I suggest visiting the Doctors Opposing Circumcision website, where you will find a plethora of information about why circumcision and other forms of genital cutting are harmful, as well as resources on how to deal with the trauma that often comes as a result of the procedure. I encourage you to donate to them as well, as they are doing good work.

Links to these organizations can be found below, and DOC also includes a page where you can find similar nonprofit organizations in countries nearer to you.