This mod adds "friendly fire" to most arts and crafts. Beat up your allies, heal your enemies, or watch them beat up each other!

Before installing, please back up the data\scripts and data\text folders in the game folder. (You'll have to use this backup or reinstall the game from scratch to restore the original game.)

Download and run the installer cs3ffm.exe and a window looking similarly to the following should appear: 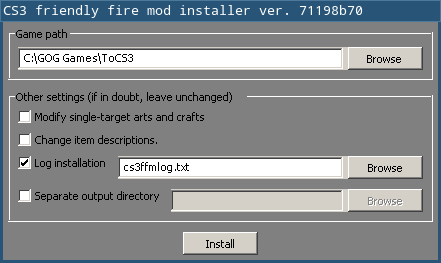 Enter the path to your existing CS3 installation in the box titled "Game path" (if it hasn't been automatically detected). Ensure that it points to the base of the installation path (such as C:\GOG Games\ToCS3), not a parent or sub folder. You can also change the other settings if you're curious. Otherwise, simply leave everything as is.

Finally, press the button labeled "Install" on the bottom and a popup message should appear after a short (<1 sec) time to confirm that the installation finished.

#Will this work with version X of the game?

The mod is tested against the english version of NISA's PC Version 1.05 (published on GOG, Steam, and Humble store). The other languages (japanese, french) are untested, but will be patched and will likely work. Older versions (or a newer one, NISA pls fix food item descriptions) are likely to work as well, but are untested.

It will likely not work with the CLE PC port despite being functionally identical to NISA's since I assume it uses different file names.

#Will this work with other mods?

Probably. Try it. In any case, install this mod last.

Check the list below and, if it's not listed there, tell me about it. Also upload the log file somewhere and include a link (don't copy & paste, it's big).

This is an intentional design decision. These fights are … interesting enough as is.

It's currently outside of my capabilities to have the primary effect of brave orders affect everyone. I could make the secondary effect (buff/healing on activating the order, e.g. +10 CP for Raging Fire) affect enemies, but I don't like the inconsistency. It also makes sense narratively for brave orders to only affect the party.

This is a quirk of the AI that I cannot change. The game uses the same data to determine both which characters are affected, and which characters should be targetted. During testing I didn't find this to be a huge problem (except if friendly fire is on for single-target actions).

All player characters' normal attacks share the same base data, which also specifies possible targets. The AoE effect comes from each character's equipped weapon. As a result, it's not possible for AoE normal attacks to have friendly fire and single-target normal attacks not to have it.

#Items with Moebius are unaffected

Same deal as with attacks.

#Link attacks are messed up

When an attack unbalances the character that the attacker is linked to, they will attack the void. I can't fix this.

I can't change this unfortunately.

First, obtain wxWidgets version 3.1.5 and extract it to a subfolder called 'wxWidgets-3.1.5'.

Special thanks to hell259 and SoftBrilliant for sharing their knowledge and collaborating on SenSchema.