Or: C is my favourite scripting language

The goal of this project was to solve all parts of Advent of Code 2020:

^2 Some programs contain commonly held assumptions, like "uint32_t is available", or "exit code 1 signals failure", or "the stack doesn't overflow". The programs may cause undefined behaviour if the input is not an unmodified one from AoC 2020. If undefined behaviour (such as signed integer overflow) does occur for an unmodified AoC 2020 input, that's a bug and I'd like to know about it.

The project goal was almost, but not quite, achieved.

Every day runs in less than one second, and the total runtime is less than two seconds. All but three of the programs compile and run faster than it takes Python just to start up and do literally nothing (i.e. 35 ms). The memory limit was no problem either: only day 5 comes somewhat close to the limit, needing 120 MiB.

I was only able to get the runtime for day 15 below one second consistently by implementing the hot loop in inline assembly. The program is still portable as the inline assembly is only used by TCC under amd64 and all other compilers fall back to plain C, but this version is not fast enough unless with compiled with heavy optimization options, which take too long at compile time.

The final compile/runtimes (on my laptop, best of ten) are as follows:

Note that the total runtime is the smallest of ten complete runs, not the sum of individual best times. The latter is about 200 ms shorter than the former.

First, copy or link the inputs files in the subfolder inputs/, with names 01, 02, …, 25. Then, if you're on a POSIX-y system and have tcc installed, the following will compile and run all programs and measure the completion time:

Alternatively, if you have a C compiler and make installed, run:

This will be much slower. Some compilers (e.g. clang on FreeBSD) may refuse to compile some programs because the makefile invokes the compiler with very strict error conditions. These errors are probably harmless suggestions and invoking make with the environment variable CFLAGS=-Wno-error should produce working executables.

To run a program individually, run:

To run each program repeatedly and print the best time, run:

If you only have make, you will need to make do with this (again, it will be much slower):

Who needs regular expressions when you have scanf?

The input is implicitely sorted by setting indices in a bool table.

Set union and intersection. Sets are represented by 26 bits of a uint32_t.

The problem itself is quite simple. Reading the input is a massive pain:

All rules can be stored in a statically allocated array at the index of the outer bag id.

In neither case are partial results memoized. Doing this may or may not reduce the runtime.

Part 1: Implement the VM, stop once the value of the instruction pointer repeats.

Part 2 is done with brute force: Change instructions one by one, check if the program terminates.

Read the adapter joltages into a bool table; this implicitely sorts them.

Part 2: Dynamic programming, starting with the largest joltage, for which we know there is exactly one combination.

There doesn't seem to be a way to shortcut the calculation, so just do it. Optimizations:

In part 2, the solution time t satisfies a system of linear congruences like this:

It is solved with the Chinese Remainder Theorem. When computed naively, interim values can become very large (~80 bits), so some care is taken to avoid overflow.

Memory is saved in a hashmap.

A previous version used a more elegent sparse binary tree, but this was slower by a factor of > 2.

The sequence is a variant of the Van Eck sequence, of which not much is known apparently. There doesn't appear to be any way to get the answer other than the obvious.

Parsing is the most difficult part again.

Part 2 is solved with a greedy algorithm that looks for a rule that can only fit to one field, then removes that possibility from the possibilities for all other rules, and repeats. This works since the assignment is unique.

These are the rules Conway's game of life.

Cell status is saved in an array of appropriate size. For performance, the sum over all neighbours is computed branchlessly, with the loop unrolled. A progressively larger size of the grid is looped over on every iteration as the size in each dimension can grow at most by one per step.

This problem seems to benefit very much from compiler optimizations. gcc -O1 produces an exectuable that is about 4 to 5 as fast as one produces by gcc -O0 (or tcc). Perhaps this is a cue that my approach can be improved, but I don't see how.

Alternatively, a hashtable might be beneficial for performance since the number of active cells is a very small proportion of the grid. I can't be bothered to try that though.

Expressions are transformed and evaluated using a variant of the shunting yard algorithm with an inlined evaluator.

The given rules describe a context-free grammar. In part one, it is even finite, as the rules are acyclic.

A general approach for part two would require a general CGF recognizer, such as the Earley or CYK algorithms. These are too slow for our purposes, so we have to take advantage of the structure of the input. It appears that all inputs have the following properties:

The latter property allows for the generation of a finite list of all strings produced by rules 42 and 31; let S_42 and S_31 these two sets.

Computing S_31 and S_42, then checking this property is reasonably straightforward.

For further optimization, note that the alphabet is binary, and all strings in S_31 and S_42 have length 8. Moreover, S_31 and S_42 both contain 128 strings and are disjoint. As a result, each string in S_42 and S_31 can be represented by one byte; valid strings can be compressed cleanly into bytestrings by replacing a with a zero-bit and b by a one-bit. Indeed, all messages in the input can, since they are all a multiple of eight characters long.

This is the absolute worst.

This procedure ultimately matches all tiles because each match is unique (modulo flippin or rotating the whole grid of tiles together).

Now we can solve part one by multiplying the values of the corner tiles.

There's probably some untapped optimization potential and the code is not as general as one might hope, but I can hardly express how done I am with it, especially since it already only takes a rather small proportion of the total runtime.

This one is conceptually the same as day 16. It's more difficult because the numbers are bigger.

Sub-games can be skipped if player 1 holds the highest card (in the decks of the sub-game) for a significant speedup. Otherwise, just do the thing. Previous deck arrangements are saved in a hashset.

Tiles are identified by their coeffients with respect to a Bravais basis: 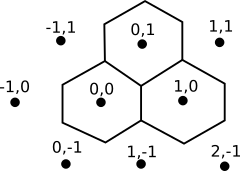 Points are saved in a dense array.

The problem is to compute the discrete logarithm in a prime number field. It is solved with the baby step giant step algorithm.