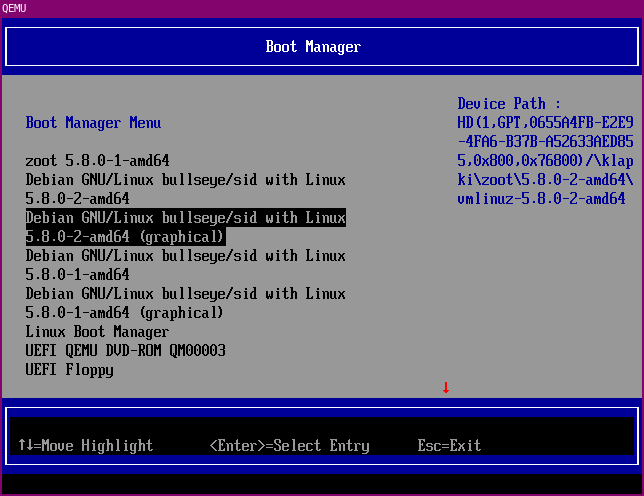 You need to boot Linux somehow, but you don't really need any EFI-side code to do it if you configure your kernel right and have something tell the firmware about it. This is that something.

klapki stores neither code nor data (well, except the kernel and initrds) on the ESP, making it SecureBoot-compatible out-of-box, and instead generates entries for the host's kernels and manages them during their lifetime from the host itself.

As seen in the screenshot, additional boot variants (just "graphical" in that case) are also supported, generating another entry for each kernel; OVMF doesn't show it, but the difference can be seen from this listing of /etc/klapki/cmdline used to generate those entries (the description is a tad verbose to match convention):

Note that klapki uses Linux-specific memfd and sendfile() interfaces, and as such building it will fail on other systems. AFAICT libefivar only supports Linux anyway, but these will have to be ported in case it doesn't (patches welcome, &c.).

Copy out/klapki to /sbin and write a /etc/klapki/{description,cmdline}, as seen in the manpage,