After looking forward to going to Sarajevo so much, it does not disappoint! Except maybe for the pervasive smoking everywhere, indoors, and even in restaurants. It is very hard to find a place where you can relax, sit and have a coffee or enjoy dinner without also breathing in smoke. I am not used to that anymore after being out of the smoke for so many years now!

Of course, it does not matter so much when the weather is nice and you can be outside all the time, but when it snows a lot and is freezing outside, as it did the last couple of days, being warm and able to breath is nice to have.

If you digital-nomad your way around having a place to work without voiding your laptop's warranty may be worth something as well :)

So far, we found two places where you can work. One is a coffee place, called EspressoLab. It looks nice inside, smoke free, the coffee (cheap filter coffee!) is great, and so is the brownie. A bit sweet perhaps, but yummie! There is also an area downstairs with more seating as the table may be full already! There are some plugs, but I don't know exactly how many. 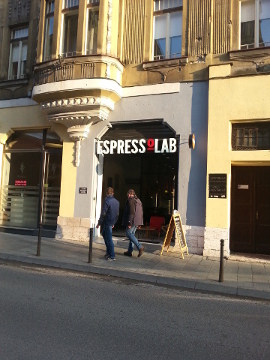 For a cheap co-working space, you can try Networks. We just showed up as the website was down at that time. It seems they don't really accept the occasional coworker just for one day, but in the end it was possible for 9 KM per day. As a really nice gesture when leaving they told us that the first day was free, so we ended up paying nothing, except for the coffees which was 0.50 KM a cup, not the best, but at least warm :-)

Of course, in the Balkans you need to eat Burek. There are a couple of nice places, without smoking in the old town. There's Bosna and Forino.

As for the other dish you can't miss, there is of course Ćevapi. You can find the good stuff at Željo and Željo 2. The picture here is of Željo 2, where you can't smoke inside. Not sure about the other Željo though...

If you want something else, a bit more variation you can try Klopa. The food was good, but the portions a bit small, maybe I ordered the wrong thing, or got used to the big portions you get everywhere else :-) 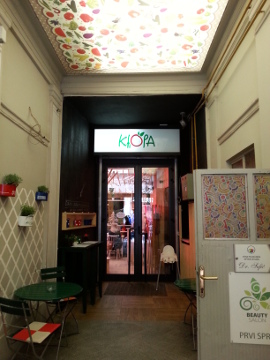 Getting just a coffee, with a donut, you can go to Tasty Donuts. Nothing special though. 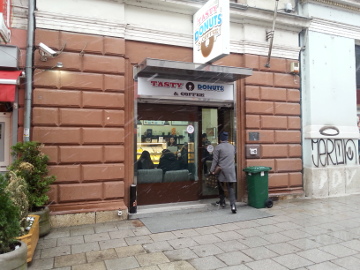