Most organizations start by deploying a single server, which can scale quite well to ~ 1000 simultaneously connected clients assuming >= 16 CPU cores with AES-NI and adequate network performance, e.g. 10+ Gbit interface(s).

There are many aspects of "scaling", and not all will be answered here, but this document will provide input about how to design and configure your VPN server(s) in order to handle a large amount of VPN clients.

Most simple deploys have a single server setup. So how well does that scale with the current software? The important metric here is "concurrent connected clients".

It is recommend to run "bare metal" and not on a virtual platform. One can start with a virtual machine, and move to bare metal later to increase the performance of the VPN server. It is hard to quantify the benefits of moving to bare metal as it depends on the VM platform that is being used and how it is configured. Dedicated network interfaces, for example using IOMMU may also increase the performance.

A CPU with AES-NI (hardware accelerated AES) is highly recommended. It will substantially improve the performance.

The server software is currently limited to 64 OpenVPN processes per VPN profile. This means that for single server deploys, the software scales to ~64 CPU cores, allowing for 64 * 64 = 4096 clients to connect. This will be rounded down due to "loss" of VPN server IPs and IPv4 network/broadcast addresses. Of course, a machine with 64 cores is still pretty rare. It will be more common to divide this over multiple (physical) machines.

To issue an IP address to all connected clients in this scenario, one would need a /20 IPv4 network configured in the range setting of the VPN profile. As for IPv6, at least an /100 is required in the range6 option. Each OpenVPN process will get a /112, the smallest block currently supported by OpenVPN.

Additional UDP/TCP ports (up to 64) can be configured with vpnProtoPorts in /etc/vpn-server-api/config.php. For example to run 16 OpenVPN processes you can use this:

As to determine how many ports should be UDP and how many should be TCP, we have some information from one of our servers: 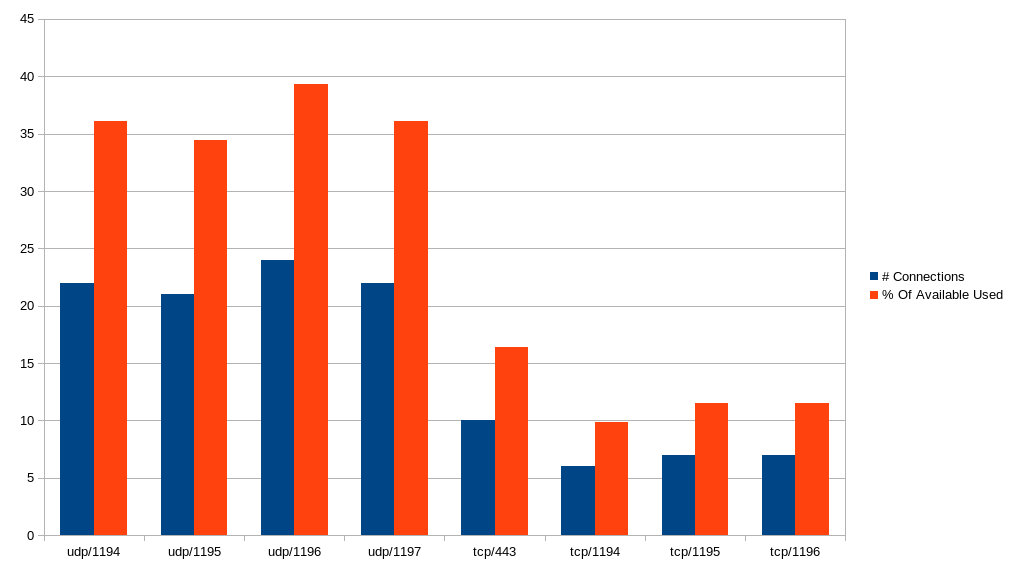 As you can see on that server we have a bit too many TCP ports available to connect to, and it would be better to allocate 3/4 to UDP and 1/4 to TCP as is done in the example above. Look here on how to check the load distribution on your server.

As all keys/certificates are generated on the server, it may make sense to switch to EC certificates instead of RSA. Generating RSA private keys can take a long time.

See the CA section of the security document for more information on this.

In order to distribute client connections over the various ports, the client configuration is generated with one UDP and TCP port picked at random. So for example, when a user downloads a configuration, the remote lines could be like this:

Because every configuration download will result in another (random) selection of ports, the load will eventually be distributed among the various processes.

Starting from release 2.1.1 of vpn-user-portal the following way of dealing with "special" ports is implemented, assuming they are used. Special ports are always added at the end of the configuration files, below the "remote" lines as mentioned above. By special ports the following ports and protocols are meant:

They have a higher chance of working in restricted networks. If they are made available through vpnProtoPorts, or exposedVpnProtoPorts one UDP and one TCP port is picked at random from the special ports, that way at most 4 "remotes" are listed in the client configuration, e.g.:

On CentOS it is possible to deploy extra servers with OpenVPN processes.

To set up a single (separate) controller and multiple nodes, go here.