translator is a tool that shows the translation of a word in many other languages. 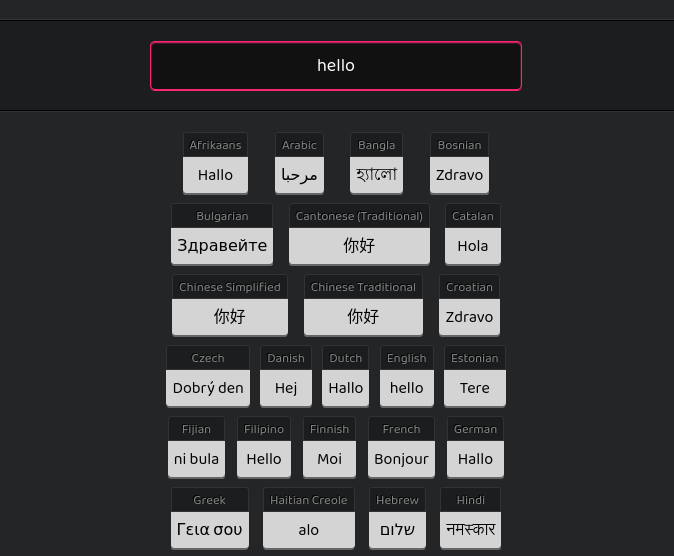 This application was originally written in 2012 to gain some familiarity with Node.js. It seemed like a suitable application to resurrect in order to explore some different client and server technologies that I haven't had a chance to work with.

In this repository there are three client and three server implementations.

As I only have prior experience with Python, the other implementations may very well range from rough around the edges to a pile spaghetti.

Aside from the languages and their tooling, the only other requirement is to have an API key for using Microsoft's Translator Text API. Once you have this key, set it as the value of the environment variable AZURE_TRANSLATOR_KEY. Each server implementation will read this environment variable.

The following instructions describe how to run this application locally using each implementation.

Before we get implementation specific, we'll need the source code, so go ahead and clone this repository.

Then jump to any section below for instructions on how to run a particular implementation.

The Python server implementation is written in Python 3 and makes use of the FastAPI web framework. It is assumed you have Python 3 installed.

First of all, change to the server-python directory.

Then create a virtual environment with venv and activate it.

Now we can install the third-party packages.

Finally, the last step is to run the server.

If you don't have Racket installed it's very simple. Head on over to racket-lang.org and follow the download and installation instructions.

Once installed, change to the server-racket directory.

Then just run the program.

In order to run the Clojure server implementation you will need Clojure and Leiningen.

Once you have both Clojure and Leiningen installed on your system, change to the clojure directory.

Then start the application. Leiningen will fetch all required dependencies which may take a little time.

Change to the client-vue directory.

Install the dependencies with yarn.

The application will be served at http://localhost:8080/.

Change to the client-react directory.

Install the dependencies with yarn.

The application will be served at http://localhost:3000/.

Change to the clojure directory.

The application will be served at http://localhost:9500/.