gmixerctl is a GUI wrapper for the OpenBSD mixerctl command. gmixerctl aims to have 100% feature parity with mixerctl, and may add a few more convenience features in the future (such as setting sndiod flags).

gmixerctl is written in in Python3 with tkinter, and operates by wrapping the mixerctl command itself. 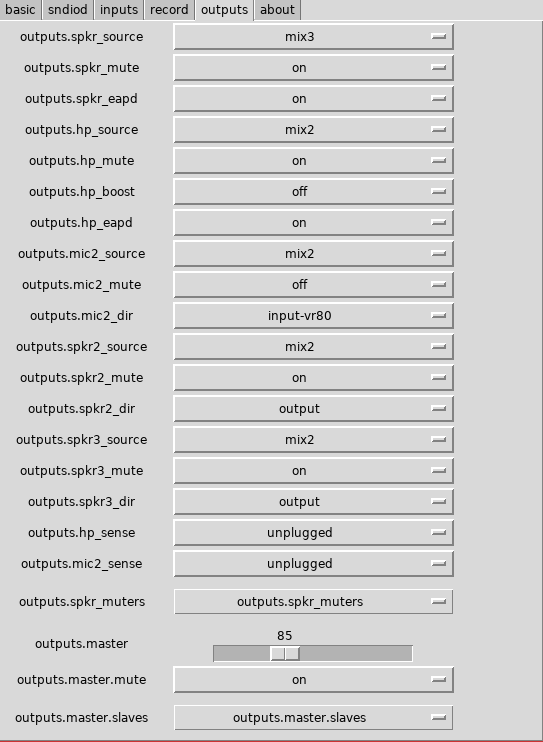 If you would like to be able to change the output device(s) that sndiod should use, you should add the following lines to /etc/doas.conf.

Contributions are more than welcome. If there is a feature you would like added to gmixerctl, please feel free to open a pull request. In particular, I would appreciate help implementing the following features:

My first attempt at writing gmixerctl was in the form of an imgui based C++ application which worked by calling into the same API as mixerctl.c, which is to say just sending ioctl() calls straight to /dev/mixer. This attempt was abandoned due to a number of issues, namely synchronous/immediate mode rendering proved difficult to combine with polling the mixer state - setting the framerate too high could crash the application, presumably by exceeding the maximum throughput of the mixer device.

Python was selected as the implementation language, as I was already familiar with it. Tkinter was chosen as the UI library due to it's reputation for ease-of use, which I found it to live up to.

In principle, I could have written a Python wrapper for the relevant audio control related ioctl() calls, but chose not to as the output of mixerctl is easy to parse, and has proved not to be a bottleneck. If someone else would like to write such a wrapper, I would be happy to use it however.